The people of Scotland have consistently given the SNP a mandate to deliver a referendum on Scottish independence. That mandate has been reinforced through 4 consecutive elections – most recently with the SNP’s stunning victory at the 2019 general election.

It would be a democratic outrage for Scotland’s democratic process to be shut down by the Tories. Here’s why.

SNP leader Nicola Sturgeon tells #Marr “Scotland can not be imprisoned within the UK against its will”#indyref2 https://t.co/CWOOqT3QJU pic.twitter.com/8Zr44bP4kK

The Scottish people will decide Scotland’s future – no-one else

The Tories are trying to block Scotland having a say on its future, despite receiving no mandate whatsoever from the Scottish electorate. Even worse – they don’t see why they need one.

They’re trying to argue that the SNP have no mandate because of its vote share, but by that logic the Tories have no mandate to deliver Brexit because they only won 43.6% of the vote UK-wide.

💻 Fact check: SNP have won a higher percentage of the vote in Scotland than the Tories won UK-wide, and won 8 times the Tories number of seats in Scotland. pic.twitter.com/CItUD9NUPf

The Tory argument also assumes that only SNP voters back an independence referendum. We know for example that a large chunk of Labour supporters, and an increasing number of elected representatives, support Scotland’s right to determine its own future.

Tories often cite “democracy” as a reason for implementing a damaging Brexit – but when it comes to Scotland and the rights of the Scottish people to decide their own future, these same democratic principles vanish into thin air.

The SNP has a solid mandate to give Scotland a choice. The SNP has more of a mandate to implement its policies than the Tories do UK-wide.

The Tories were absolutely clear in their election materials – Scottish voters at this general election would decide whether or not there is another referendum on independence. The Scottish people decided that there would be.

If the Tories wanted to deny Scotland a choice over its future it should have won a majority of Scottish seats at the election. Instead it won 6 out of 59. 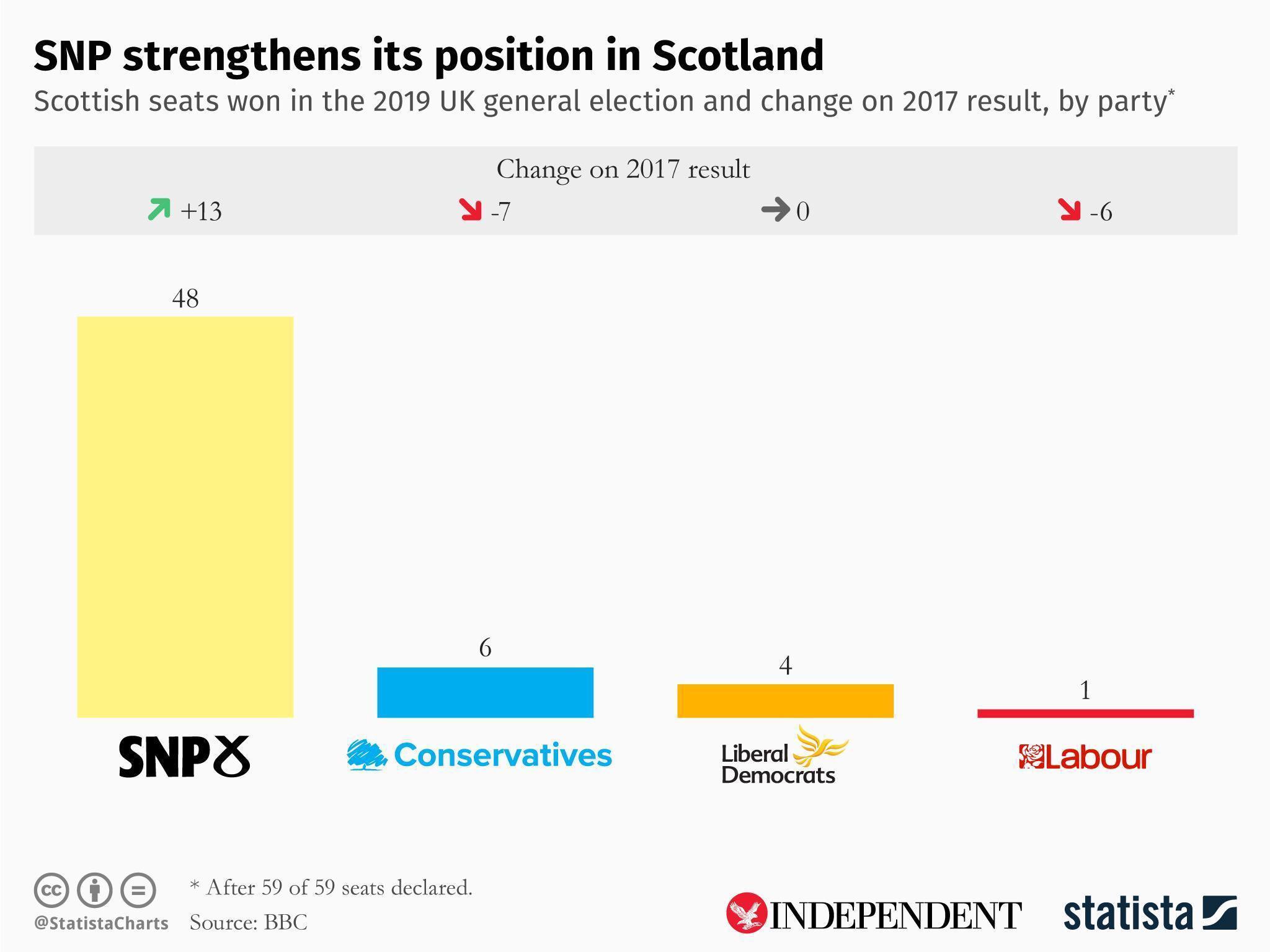 Now they want to shift the goalposts

Now the Tories and some in Labour are trying to shift the goalposts for a new independence referendum, saying that it should only take place if the SNP win an outright majority of seats at the 2021 Scottish Parliament elections.

But the Scottish Parliament was specifically set up with a system of proportional representation to prevent single parties holding outright majorities, and a pro-independence majority already exists.

On the day after the election Nicola Sturgeon set out the next steps towards a fresh referendum – she said it was not about asking Boris Johnson for permission, it was instead an assertion of the democratic rights of the Scottish people.

🏴󠁧󠁢󠁳󠁣󠁴󠁿 @NicolaSturgeon: “Last night the SNP won an incredible 80% of seats in Scotland – an overwhelming endorsement of our campaign and message.” #indyref2020

It’s time for Scotland to choose. Pledge your support for independence here: Yes.scot