Over the years, the Scottish Tories broke one promise after another – lining up behind their Westminster bosses and imposing a hard-right Brexit that Scotland firmly rejected.

Douglas Ross and the Scottish Tories enthusiastically backed Boris Johnson’s Brexit, despite its disastrous consequences for Scotland – and he would probably prefer if people forgot what they’ve said.

To remind the Tories, here are just some in a string of their lies, deflections and broken promises.

The Erasmus+ programme, established by former SNP MEP Winnie Ewing in 1987, is a European scheme that allows young people, regardless of their background, to be able to study, volunteer, or work abroad.

Jackson Carlaw, former leader of the Scottish Tories, promised that the UK government was “fighting to ensure that Erasmus+ continues” and slammed the SNP for “grandstanding” when we repeatedly raised concerns about post-Brexit access to the scheme.

📹 Erasmus+ is something which all parties agree must continue post Brexit. For other parties to grandstand against the UK Government is simply wrong. The young people in #Eastwood and across Scotland should know that we are fighting to ensure that Erasmus+ continues 📚 pic.twitter.com/tnWei0TIey

That’s despite Boris Johnson, only a year before, claiming there was “no threat to the Erasmus scheme” and that the UK will “continue to participate in it“.

A year ago the PM promised in the House of Commons that the #Erasmus scheme was safe in his hands. I was apparently “talking out of the back of my neck” for suggesting the disastrous outcome we have today. #UKEUDeal pic.twitter.com/Hv7DY4hXPT

In 2018, Douglas Ross said it would be easier to get someone to “drink a pint of cold sick” than to back a fishing deal that allowed two years of access to waters for EU vessels. 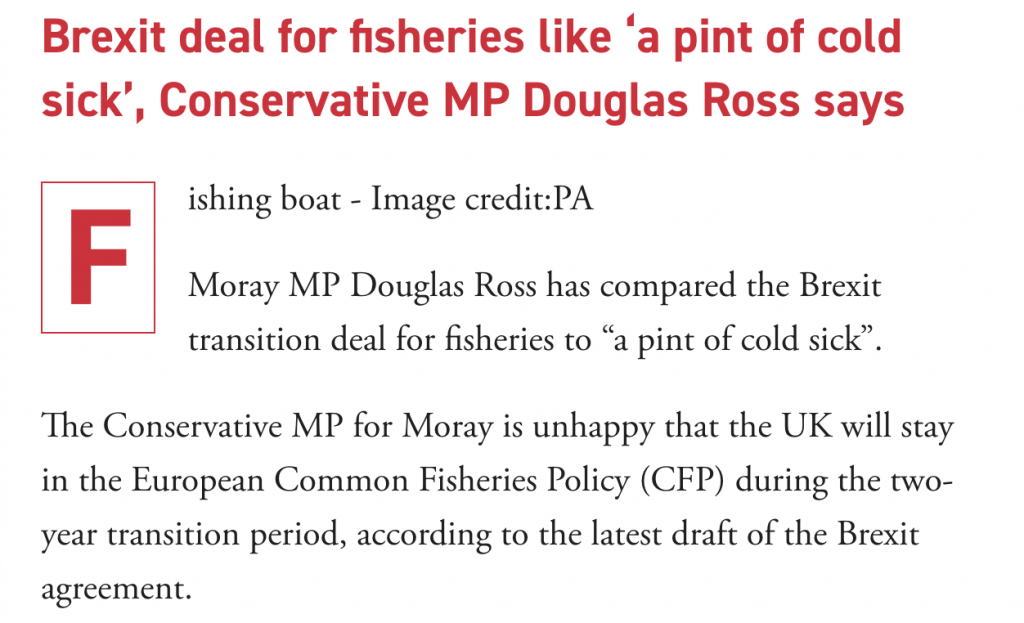 The SNP have always put political games before the people they serve and by voting against this deal they are once again showing their true colours.

John Lamont is another Scottish Tory who made promises to Scotland’s fishing community by pledging he would vote down any deal that did not deliver “total control of fish stocks and vessel access”. 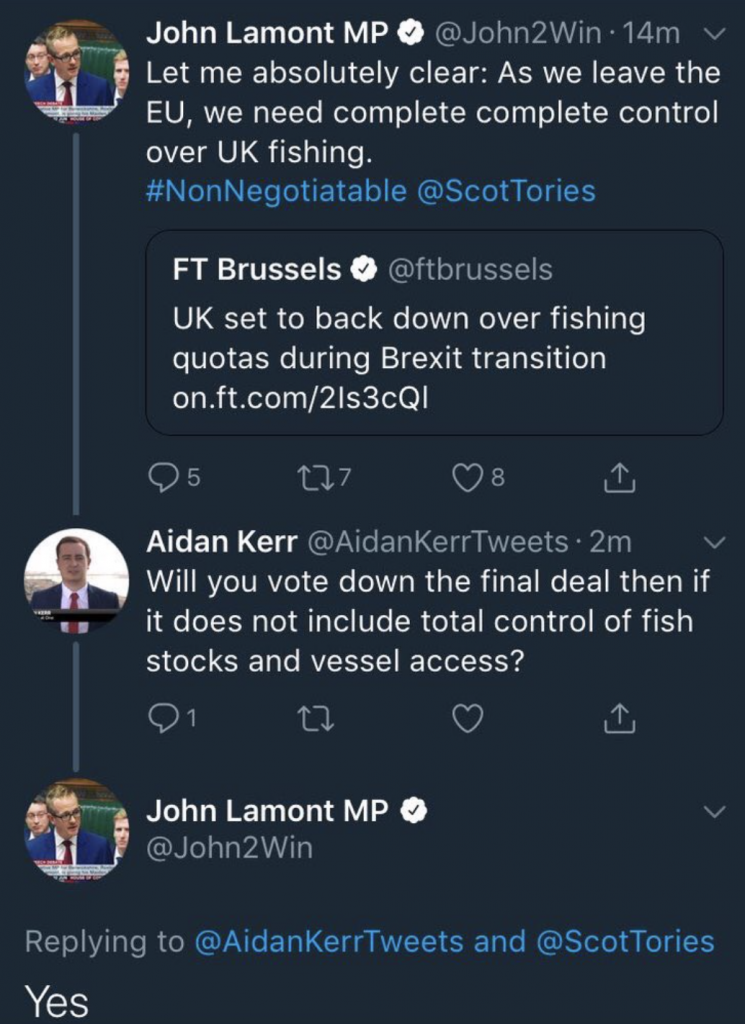 All of the 13 Scottish Tory MPs, including Douglas Ross and John Lamont, even signed a letter in 2018 saying they “could not support an agreement with the EU that would prevent the UK from independently negotiating access and quota shares“, claiming that it would be a “betrayal of Scotland” if they voted for that.

Boris Johnson’s Brexit deal didn’t even come close to delivering that – but the remaining six Scottish Tory MPs have emphatically backed what they themselves called a “betrayal of Scotland“.

David Duguid claimed access to waters was his “red line” and said it should not be tied to any Brexit deal.

Even though Boris Johnson’s trade deal gives EU vessels access to UK waters for several years, Duguid’s red line has mysteriously vanished – proving yet again that Scottish Tories will always roll over to their Westminster bosses.

In 2018, BBC reported that Baroness Ruth Davidson and David Mundell could not support any Brexit deal that introduces different arrangements for Northern Ireland, suggesting they would be prepared to resign if Northern Ireland was given special arrangements which differ from Scotland. 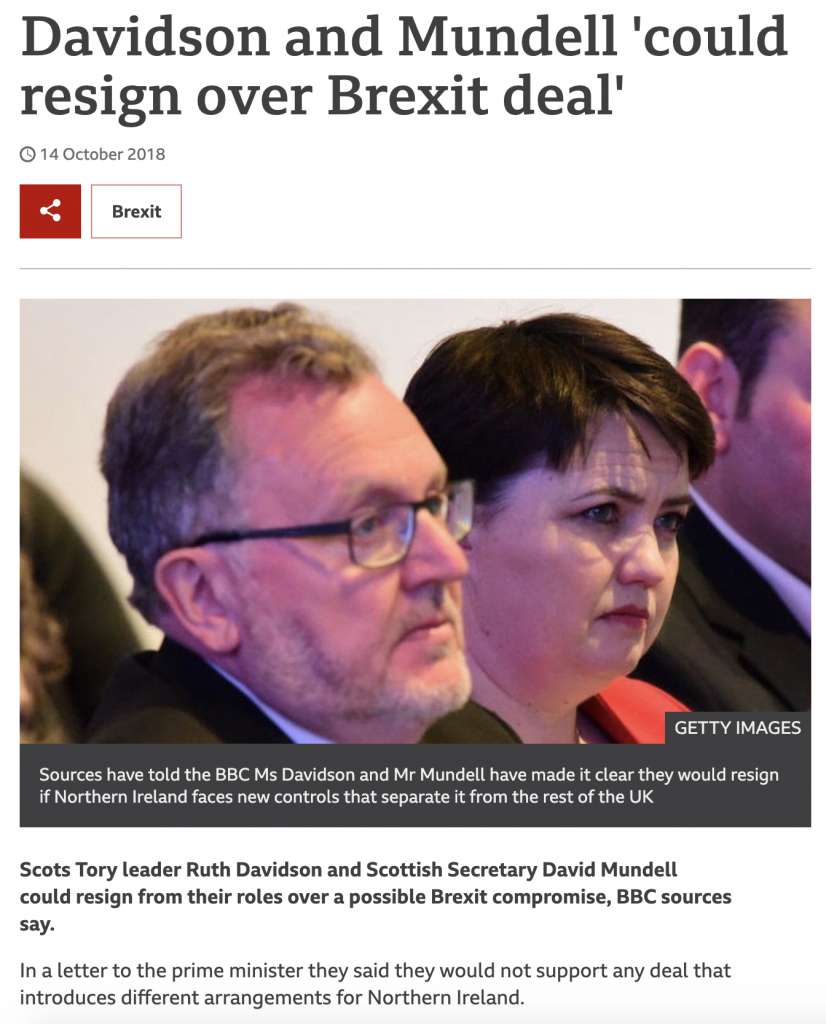 Now, Boris Johnson’s Brexit claims to give Northern Ireland “the best of both worlds” – with extra benefits and special access to the EU’s single market – while dragging Scotland out of the EU with the hardest Brexit, despite Scotland voting to remain in the EU by the highest margin.

And instead of staying true to their word and resigning, David Mundell marched through the Westminster lobbies to back the Brexit deal that is fundamentally unfair for Scotland, while Ruth Davidson has been rewarded with a life peerage and an ermine cloak.

🇪🇺 The UK government are promising a special deal for Northern Ireland – where it can retain access to the EU’s Single Market. Why can’t Scotland have the same deal?

Scotland has been completely ignored throughout the Brexit process – in stark contrast to the consistent solidarity shown by the EU to Ireland.

While the EU is giving Ireland €1.05 billion from its Brexit mitigation fund, Scotland has not received a single penny in compensation from the UK government for a Brexit which we overwhelmingly rejected.

Despite endless Vote Leave promises that with Brexit, the UK would “thrive like never before”, reports have revealed that the volume of exports to the EU fell by a staggering 68% in the month after the UK officially left the Brexit transition period.

The Road Haulage Association’s chief executive, Richard Burnett, told the Observer: “I find it deeply frustrating and annoying that ministers have chosen not to listen to the industry and experts”

It’s clear that Boris Johnson’s Tory Brexit is an economic disaster for Scotland’s economy, leaving businesses struggling and putting jobs on the line.

Scottish firms are being hammered with a mountain of extra Brexit costs, red tape and barriers to trade with the EU – a market seven times the size of the UK.

This ridiculous claim by the Better Together campaign has not aged well.

What is process for removing our EU citizenship? Voting yes. #scotdecides

In 2014, we were told the only way to preserve Scotland’s EU membership was to vote “No”, and that the United Kingdom was a “partnership of equals“.

Since then, the Brexit vote and the way in which Scotland has been consistently ignored by Westminster have turned these promises into dust.

Scotland’s future must lie in Scotland’s hands – not those of Boris Johnson and the Scottish Tories, who have consistently sold out Scotland’s interests and imposed an extreme Brexit against our will.