We are now only three weeks away from the supposed date of Britain’s exit from the European Union and yet still there is immense uncertainty facing communities and businesses – this is utterly unacceptable.

With the Spring Statement now due this Wednesday, just a day after the Prime Minister’s second Brexit vote, the Chancellor must take action to deliver confidence in the economy.

Here are just 50 unanswered questions I have sent in a letter to the Chancellor, that he and his government have failed to answer. Hopefully he’ll finally give some clarity to people across the country, or else the idea of the Tories’ long-term economic plan will be exposed once again as nothing more than an on-repeat slogan.

50 Unanswered questions by this Tory Government

1. What economic assessment have you completed on the impact of the Prime Minister’s deal on the economy?

2. Does it remain your view that the Prime Minister’s Brexit deal will leave the economy “slightly smaller” and that “in pure economic terms, there will be a loss”?

3. We know Brexit has already cost each UK household £1,500. What action are you taking to put this back into people’s pockets?

4. Will you make an assessment on the impact of the UK’s increasing dependence on service exports to the EU on public revenues if we see diminished access to the Single Market either under the Prime Minister’s deal or under no deal?

5. Will you immediately reverse the £2 billion in real terms cuts the total Scottish fiscal budget has faced between 2010-11 and 2019-20?

6. The Scottish and Welsh governments need to know how much funding they will lose as a result of Brexit. On 15th Feb, the Treasury refused to give details of post-2020 funding levels. When will you clarify what funding will be available after next year?

7. Will you confirm the total amount of additional funding Scotland will now receive as a result of an additional £140 million being given to the Northern Irish Executive?

8. When will Scotland receive the £53m funding gap owed by the UK government for our NHS?

9. Scotland’s police and fire services were the only territorial forces in the UK who were asked to pay VAT. This was a remarkably unfair situation that cost our frontline services £175 million since 2013. Will you settle the UK government debt to Scotland’s emergency services and refund the money owed?

10. According to Scotland’s Chief Constable, up to 400 Scottish police officers could be deployed to deal with the consequences of Brexit. This is not a mess of Scotland’s making. Will you commit to fully refund Police Scotland any extra costs as a result of Brexit?

11. When will the long promised UK Shared Prosperity Fund be fully rolled out?

12. What will the first budgetary allocation to the UK Shared Prosperity Fund consist of?

13. The Joseph Rowntree Foundation has called on the UK Government to ensure the UK Shared Prosperity Fund should at the very least match the £2.4 billion a year that communities across the UK currently receive as a result of EU structural funds. Will you commit to matching the £2.4billion fund in a UK outside the EU?

14. Will you scrap all costs associated with the EU nationals’ citizenship application process?

15. Many EU citizens have to travel to be able to scan their documents at designated assisted digital locations. With only four weeks to go until the scheme opens, only seven locations have been opened in Scotland. Will you commit to reimbursing EU citizens the travel costs associated with the application process?

16. The minimum income requirement means that those earning less than £18,600 cannot have a family member from outside the EEA join them in the UK. It keeps families apart, job vacancies unfilled and the social and cultural
benefits of immigration reduced. As part of the spring statement, will you scrap this senseless policy?

17. The children’s citizenship registration fee, which was originally £35 in 1983, has risen sharply in recent years. Since 2013, fees have increased by 50%, from £673 in 2013/14 to £1,012 in 2018/19. It is deeply immoral for the Home Office to be overcharging children, especially those that now need to apply for citizenship as a result of the UK leaving the EU. Will you commit to scrapping the fee?

18. Scottish Government analysis found the average EU citizen in Scotland adds £10,400 to government revenue and £34,400 to GDP each year. Will you commit to scrap the UK Government’s plans to end freedom of movement?

19. Scottish Government analysis, published in February estimates real GDP in Scotland will be 4.5% lower by 2040 than it would have been otherwise, as a result of lower migration from the EU. What plans have the Treasury and the Home Office departments made to mitigate the cost of lower migration?

20. What is the anticipated cost of additional recruitment for the NHS given the ongoing loss of EU staff as a consequence of this government’s immigration policies?

21. A recent forecast from the Home Office suggests that the original costs of the new emergency service mobile communication programme are set to almost double to £964.5 million over the course of the programme, with an additional cost of £20.7 million in 2019/20 and significant peaks in the next 5 years. Will you provide additional funding to the Scottish Government to meet those costs?

22. Has the Treasury taken into consideration the financial loss if Brexit results in a significant fall in the number of EU students seeking to pursue the third level education in the UK?

23. What financial resource is the Chancellor committing in order to make up for the loss of vital EU funds that drive research and innovation initiatives across Scotland and the UK – particularly the Horizon 2020 programme and its successors?

24. What financial assessment has been made of the initial and ongoing budgetary consequence a new tariff regime and system for imports will have post-Brexit on the economy?

25. The Europe-wide Oxera consultancy have assessed that Brexit border delays could result in economic damage of more than £1bn a year. Have the Treasury budgeted for this cost?

26. A new and extensive regulatory system for Export Health Certificates and Certificates of Origin may be required as part of certification requirements post-Brexit. How much will this cost?

27. As part of no-deal preparations, has any financial resource been spent, or been committed, to planning for border infrastructure in Northern Ireland?

28. It takes several weeks for container ships to travel from the UK to East Asia, Oceania, or South America. Sea-freight is leaving the UK now with no idea of the trade rules that will be in place when the goods arrive. What impact assessment has the Chancellor done on the consequences of this to the economy?

29. The UK government’s two-child cap has driven child poverty rates up. Will you scrap this immoral punitive policy?

30. What will the economic impact be of the forecast 6% rise in child poverty by 2023-24 under this Conservative government?

31. In a written question response to Neil Gray the MP for Airdrie and Shotts, the DWP said that the reason lone parents under 25 on Universal Credit receive less money than under the legacy system is because they have lower living costs. Can you tell me in what way it costs a 24 year old less to be a single parent than a 26 year old?

32. Your boost to the Work Allowance at the Budget only reversed half of the cut, and the benefit freeze from April 2019 will cut more from people’s benefits in one year that the total investment in the Work Allowance boost up to 2022. In what way is this bringing austerity to an end?

33. Will you end the benefits freeze immediately?

34. The UK has the lowest state pension in the developed world, according to the OECD, and your government want to go even further and cut Pension Credit from mixed age couples who, by definition, are already disadvantaged. Will you rule out this reckless cut?

35. The UK Government have completely washed their hands of responsibility for protecting the BBC licence fee for over-75s. Will you rule out introducing a licence fee for 4.5m pensioner households?

36. Of the 14.2m people in the UK living in poverty, 2.5m are less than 10% above the poverty line. What funding are you making available to stop more people falling into poverty?

38. Leaving the EU requires a restructuring of capacity in the Foreign and Commonwealth Office. What additional funding will the Chancellor be delivering to achieve this aim?

39. The Foreign Affairs Committee have warned “The cuts imposed on the FCO since 2010 have been severe … if further cuts are imposed, the UK’s diplomatic imprint and influence would probably reduce, and the government would need to roll back some of its foreign policy objectives”. What steps are you taking to rectify this?

41. The impact of climate change is being felt ever more strongly, particularly by those who are least able to cope with the implications of it. This is not just a humanitarian issue, but an issue that affects the stability and security of
everyone everywhere in the world. Will you follow the example of the Scottish Government and launch a Climate Justice Fund?

42. The government is spending more than £2.2billion a year on nuclear weapons. There is no value for the taxpayer here. Will the Chancellor finally scrap this outdated vanity project?

43. The NAO has called the Ministry of Defence’s equipment plans unsustainable two years running, with a massive multi-billion pound black hole in the budget. What revisions will you make to the Defence budget for rectifying this mess?

44. The Nuffield Trust have forecast that, even under the Prime Minister’s deal, the costs of medicines will rise post-Brexit. Have you factored this in to financial planning?

45. Will you compensate public services for any increase in costs stemming from Brexit-induced inflation?

46. Will you introduce a £750m small and medium-sized enterprises’ support service to deal with Brexit uncertainty?

47. What are you doing to tackle late payments to small businesses?

48. Bank of England analysis shows the UK relies on the EU for over 35% of oil & gas exports. When will you announce a much needed North Sea Oil & Gas sector deal?

49. How much investment has the UK lost to other EU capitals as a result of the UK leaving the EU?

50. How many jobs has the UK lost to other EU capitals as a result of the UK leaving the EU? 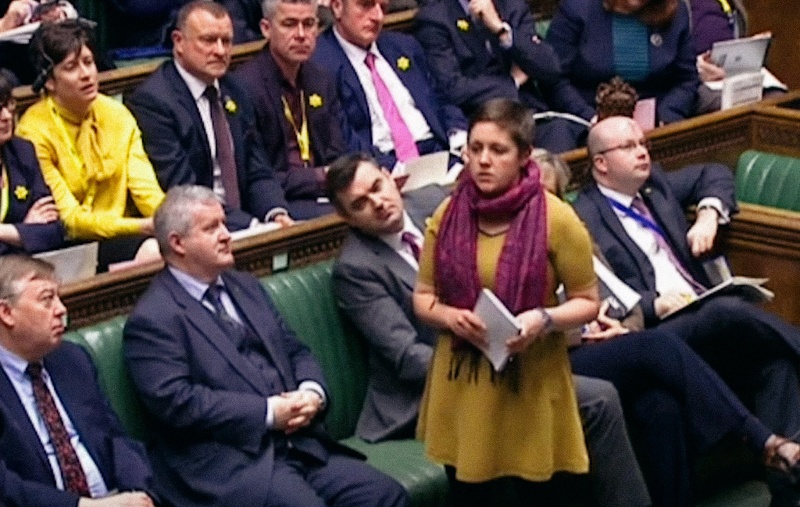 Scotland has a mandate to pursue independence

Theresa May tried to falsely claim that Scotland has no mandate for a referendum on Scottish independence.
This is not true. Scotland cannot be denied the right to choose its own future.

Michael Russell: Scotland can escape Brexit to a better future

It is a long way from “Lead don’t Leave”, a slogan pretending to be a promise much trumpeted in the first independence referendum, to “Once you’ve hit the iceberg, you’re all on it together”.