Scottish Conservative MPs at Westminster have spent the past weeks spread misinformation on the facts of broadband in Scotland. The Scottish Government’s Cabinet Secretary responsible for digital connectivity, Fergus Ewing MSP, responded to their comments and set the record straight: Superfast broadband availability in Scotland has increased at a faster rate than other UK nations.

There has been a great deal of misinformation from the UK Government on broadband delivery in Scotland in recent weeks. I am delighted, therefore, to take this opportunity to set the record straight, by answering the three questions outlined in your letter.

1. Why have some English local authorities not only contracted the second phase but have moved onto the third, before the Scottish Government have even got started procuring Phase 2?

The short answer is we didn’t choose to do DSSB in phases. English local authority projects were of a far smaller scale than our Digital Scotland Superfast Broadband (DSSB) programme and required additional phases.

Rather than taking forward 32 individual local authority-led procurements, we took the joint decision with local government partners, and the UK Government, that we would aggregate public investment across two regional projects in Scotland. This created a scale that has dwarfed any other project in the UK, extending broadband access to over 800,000 premises across Scotland so far, with further deployment to follow throughout 2018.

The success of this approach, and the resultant scale of our ‘Phase 1’ project, removed the need to progress a Scottish ‘Phase 2’ project in a similar timescale to other parts of the UK. In effect, the DSSB programme is Phases 1, 2 and 3 rolled into one.

The idea that Scotland is behind the rest of the UK simply because we haven’t yet launched a second procurement is laughable. The DSSB programme was constructed to avoid the need for successive small-scale procurements.

The success of this approach is demonstrated by the coverage figures. The most recent Ofcom data shows that Scotland has made the fastest progress of any of the UK nations in extending superfast access.

Now that the coverage footprint of DSSB is known, it makes sense to launch a new procurement, which we will do in the coming weeks. Crucially, we are doing this to deliver our commitment to 100% superfast broadband access by 2021 – a commitment that does not exist anywhere else in the UK. 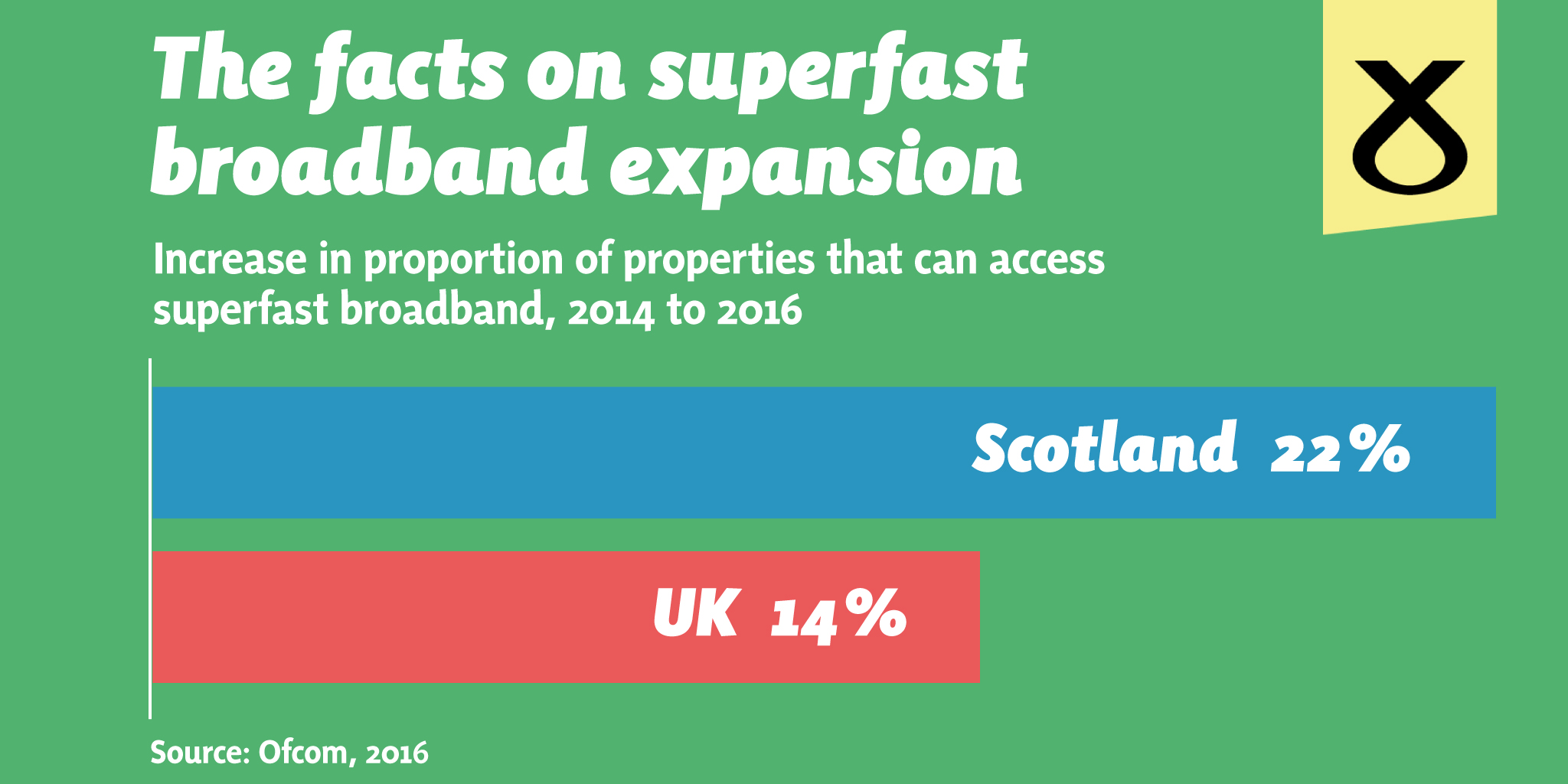 2. Do you accept that Scotland is behind every single English local authority, the Welsh Government and Northern Ireland in its approach to Phase 2?

I completely reject this claim. As outlined above, the DSSB programme has delivered more than any other Phase 1 project anywhere in the UK. It will continue deployment throughout 2018, at which point the new Reaching 100% (R100) programme will kick in.

Prior to our intervention, broadband coverage in Scotland had lagged behind the rest of the UK for a variety of reasons, including the challenging nature of our geography, low population density and the regulatory environment. The scale of investment delivered through DSSB, and the speed at which it has deployed, has seen Scotland close the gap on catch the rest of the UK in coverage terms.

We are now ready to launch the R100 programme; but it is important to understand that the R100 programme is not equivalent to the Phase 2 projects progressed elsewhere in the UK. It will deliver superfast access to every premise in Scotland. No other part of the UK has made such a commitment.

The UK Government appears happy to stop at 95% superfast coverage across the UK and consign those in the most rural areas to the slow-lane in terms of speeds, either through a 10Mbps Universal Service Obligation or by seeking a hastily constructed deal with BT to deliver something similar.

I wholeheartedly agree with John Lamont, who argued in the recent Westminster Hall debate on broadband, that the UK Government should have set the broadband USO at a higher speed than 10Mbps.

The Scottish Government does not believe that 10Mbps is acceptable for rural Scotland; which is why we will invest to ensure that 30Mbps is available to every home and business.

It is deeply unfortunate that the UK Government, which has the power to set a superfast USO or to invest directly in high-speed infrastructure across all of the UK, have chosen to do neither.

I would hope that the leadership shown by the Scottish Government would be welcomed by all Scottish MPs and, indeed, that you will urge the UK Government to match the ambition that we are showing in what is, of course, a reserved area. 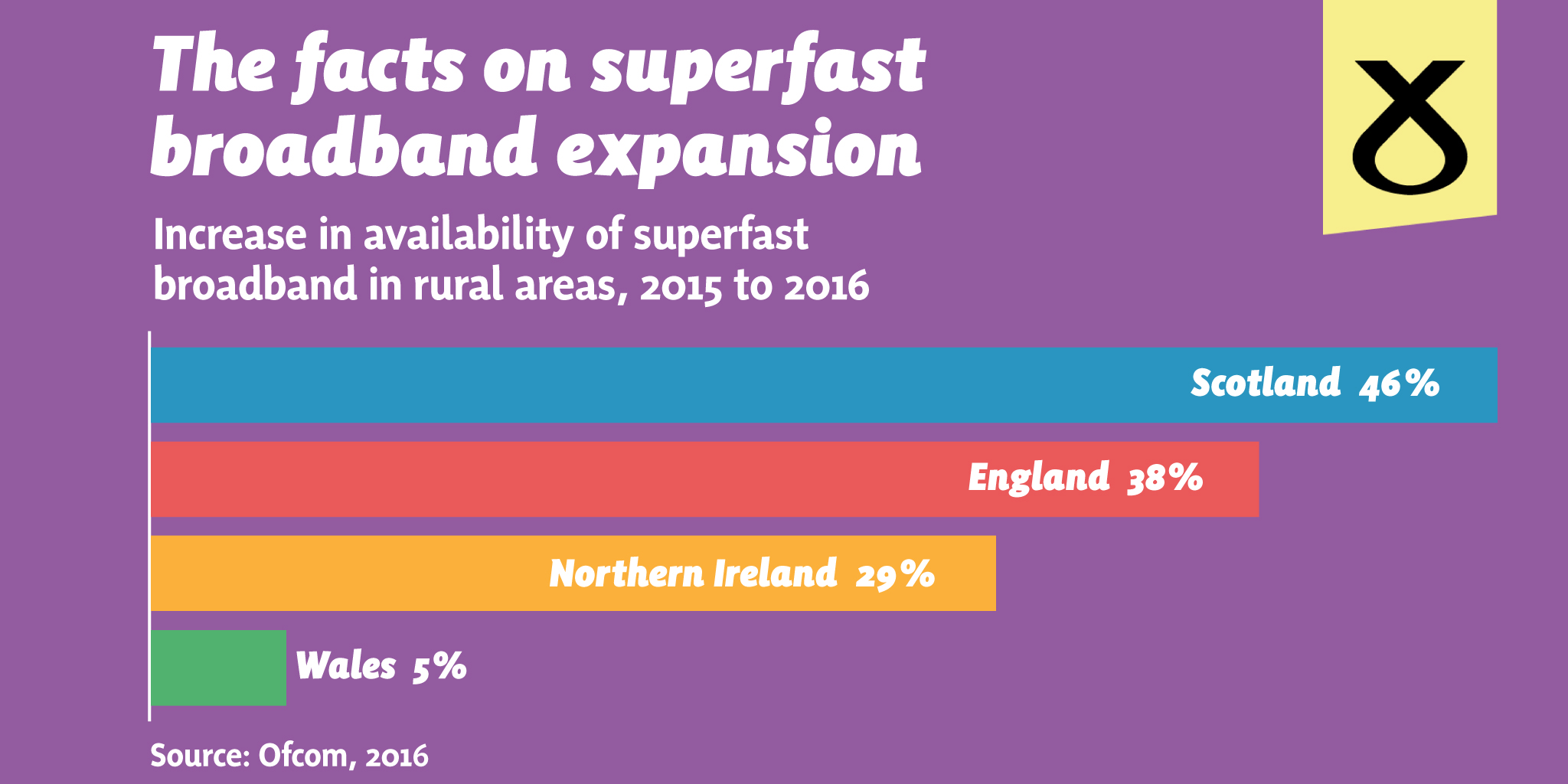 3. Can you confirm that every local authority region in Scotland will see new broadband delivery in both 2018 and 2019?

The DSSB programme will continue to deliver throughout 2018, utilising Gainshare and other residual funds within both contracts, and this will extend into every local authority area.

We will formally launch the R100 procurement process in the coming weeks. This procurement will take place in parallel with continuing DSSB delivery through Gainshare, and we expect that R100 deployment will be underway across all of Scotland in 2019.

The truth is that the Scottish Government, and our local authority partners, have developed an enviable delivery track record on broadband in recent years. The DSSB programme has delivered broadband access at a scale unmatched anywhere else in the UK. 800,000 premises and counting now have broadband available as a result of our investment. Audit Scotland has recognised the success of the programme and Ofcom figures demonstrate that the coverage gap has been closed.

It is hugely unfortunate that a new intake of Scottish MPs appear intent on overlooking the facts, and underplaying what has been a success story for Scotland. This should be an opportunity for us to celebrate the success of the DSSB programme – a joint investment between our two Governments – and to collectively turn our attention to finishing the job through the R100 programme.

Instead, the UK Government has committed just £20.99 million to the programme – less than the amount allocated to Devon and Somerset for a less ambitious programme, and substantially less than the Scottish Government’s planned investment. Persuading UK Ministers to address this disparity in funding would seem to me to be a far more fruitful use of your time at Westminster than parroting baseless and false claims about broadband delivery in Scotland.

I trust this response sets the record straight.