Winnie Ewing stunned the political world by storming to victory in the Hamilton by-election on November 2, 1967.

Her sensational win heralded a new era in Scottish politics. Within six months, Ted Heath provisionally committed the Tories to devolution and soon after that the prime minister Harold Wilson established the Crowther Commission looking into the need for devolution in Scotland and Wales.

“Hamilton was a victory that had dealt a strong blow to the soft underbelly of Labour’s supposedly invincible heartland,” says Winnie.

“I remember the Nationalist thinker and wit, Oliver Brown, saying that it had ‘sent a shiver run along the Scottish Labour backbencher looking for a spine to run up’.

“The result of the by-election was a tremendous shock to Labour and to the political establishment, and it brought into being an SNP which would become the major opposition to Labour in Scotland in the closing decades of the twentieth century and into the twenty first.

“It also confirmed the central question of modern Scottish politics would become that of independence, because my victory at Hamilton woke up Scotland and the Scots – worldwide – and made them start to think about their future.” Although the Party had been doing well in the months leading up to Hamilton – coming close in Glasgow Pollok – the win was still unexpected. But it was only by chance Winnie stood.

She had told three young men from the Hamilton SNP branch that she was honoured to be asked to stand but said as a mum of three young children it wouldn’t be possible.

“I thought that would be the end of it,” Winnie says. “However, as they were leaving my husband Stewart arrived home. I couldn’t resist the slight small boast that these young men had asked me to go on the short leet. “So they came back into the house and had another dram and eventually I said yes.

“Later I remonstrated with Stewart. What on earth would we do if I won? He was more sanguine, pointing out that there were three men on the short list as well, and that therefore I would not be chosen. “That, paradoxically, did it. I was so exasperated by such an expectation that I decided to make my bid in all seriousness.”

Winnie found out she had been selected as the Party candidate 18 months before the by-election itself. The sitting MP Labour’s Tom Fraser was appointed the new Chair of the South of Scotland Electricity Board in June 1966 but it wasn’t until July 1967 that he stood down as MP to take up his post as head of the North of Scotland Hydro Electricity Board.

“The eighteen-month campaign was supported by thousands of Scots,” Winnie recalls. “Every door was knocked at least twice. “Many people have asked me over the years if I thought during the Hamilton campaign that I was going to win. I felt I was going to win from the beginning, but it was the motorcade on the Saturday prior to polling day that finally convinced me that it was not a fantasy: that motorcade took an hour to pass by.” 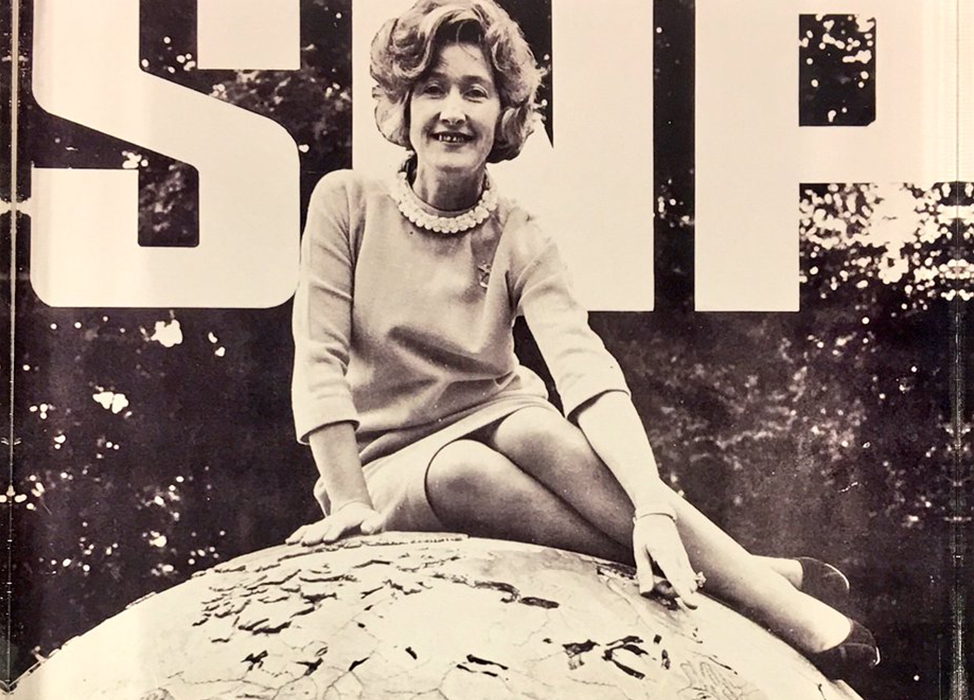 After the hard slog of the campaign, Winnie was relieved to see polling day itself and described the atmosphere as “electric”. “It seemed unreal. It rained torrentially all day,” says Winnie. “The atmosphere inside the count was electric but outside it was even more exciting. From the hall I could see vast crowds, all under umbrellas and all, it seemed, waving saltires.

“When I went out to greet the crowd they were ecstatic and I felt the strongest feeling of euphoria I have ever felt.

“Some words that I used that evening to the crowd have stayed with me ever since and have become a sort of motto for our national movement.

“During the campaign I had my picture taken sitting on top of the model of the world which is in the David Livingstone Memorial Park in Blantyre. The curator actually got into trouble and almost lost his job because he was a supporter and had allowed me to be photographed there.

“I must have been thinking about that picture and globe when I spoke to the crowds outside the hall. Quite unprepared, the words came to me to sum up what we needed to do.

‘Stop the world!’ I said, ‘Scotland wants to get on.’ She still does.”